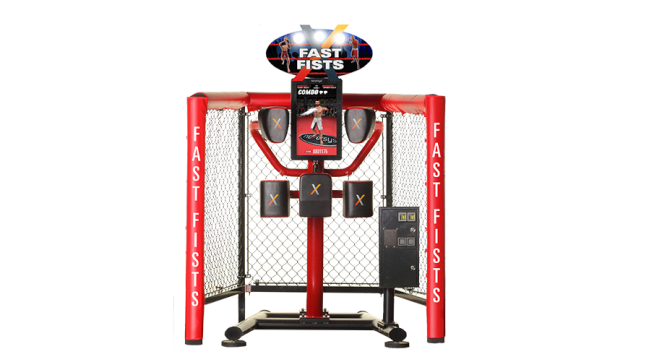 Nexersys has released the Fast Fists 1.3 software upgrade for the Nexersys Arcade Model.

Nexersys has recently launched Fast Fists 1.3, the latest software for the company's Arcade Model. Fast Fists is a fast, rhythm-based striking game that places players in a virtual ring and challenges their striking skills against a real target. To score points, players must throw real punches and hit real mitts. They must watch the targets on the screen and strike the pad that corresponds to the target as quickly as they can.

Fast Fists has a ladder of fighters in mitt-training and competition rounds. Players can either compete against other players for points or they can challenge virtual 3D fighters on their own. The mitt-training rounds allow players to learn the strikes before fighting real opponents in the ring. The competition rounds challenge them to ladder up and unlock new fighters as they progress to new levels of difficulty. Each level gets progressively more challenging and players are asked to react more quickly and throw more punches. The mitt-training rounds introduce players to each new competition round, offering a preview of the strikes they will have to throw.

Fast Fists was developed for the Nexersys Arcade Model, which has a foldable steel cage and a marquee with ambient lighting and speakers added to make the experience more exciting for players. The Arcade Model also has longer arms than the Fitness Model and it doesn't include leg pads. It comes with a 22'' HD touch screen monitor, a CoinBox, and five two-toned leather strike pads with three-axis accelerometers.

Nexersys' arcade boxing game is fun and very physically involving, especially as players reach new levels and the prompts get faster. The Arcade Model supports gameplay for up to four players.

Fast Fists 1.3 was developed based on player feedback and comes with a number of interesting new features, including additional fighter characters, new strike combos for the new fighters, and the option for players to skip the mitt-training round and go straight to the competition round.